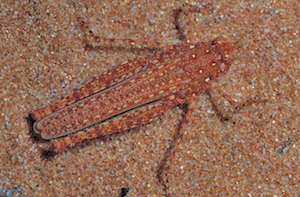 A team of researchers at Texas A&M University and the Museo de La Plata, Argentina, has determined that one of the most widespread grasshopper lineages likely originated not in Africa, as previously believed, but in South America. Following a decades-long genetic analysis of DNA from 142 grasshopper species in 22 countries, the researchers inferred evolutionary pathways for the largest taxonomic grasshopper family, the Acrididae. Acrididae includes some 6700 species, including over 500 Australian grasshopper species. By analysing nucleotide sequences of both nuclear and mitochondrial genomes, the team found that grasshoppers within Acrididae evolved from a common ancestor in South America in the Paleocene some 59.3 million years ago and then diversiﬁed. This finding may prompt taxonomists to revisit grasshopper classiﬁcation. Before DNA analysis, differences in male grasshopper genitalia were used to differentiate species, which meant grasshopper species with similar body forms due to convergent evolution were often incorrectly grouped with unrelated species. Efforts are underway to increase the taxon sampling and include more phylogenetic markers to generate a comprehensive phylogeny that will likely result in reclassification of major groups within Acrididae.