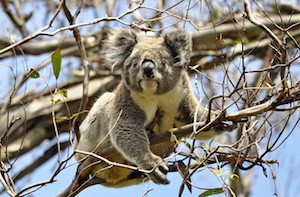 Endogenous retroviruses (ERVs) are fragments of degraded DNA (‘junk DNA’) from retroviruses and are mostly harmless. Having invaded the host’s body long ago, over time they become incorporated into the host’s germline and then hijack the DNA-replicating process to make more copies of themselves. At first, ERVs may still be virulent, but over time, they stop coding for diseases and become inert. Almost all known ERVs invaded their hosts millions of years ago, but the koala retrovirus (KoRV) is still relatively young, with invasion taking place within the last 50,000 years. An individual koala can have as many as 100 insertions of KoRV in its genome. Researchers studying KoRV to understand the early events critical to its invasion have now been able to monitor the process whereby the ERV becomes inert. They found that a more ancient, unrelated ERV is inserting itself into the new KoRV via recombination, effectively deactivating it. The prevalence of KoRV varies greatly across the koala population. Queensland koalas are positive for KoRV and have high numbers in their genome, whereas southern Australian koalas have a much lower prevalence and copy number; KoRV is even absent from some southern individuals. Unfortunately, it will likely be thousands of years before KoRV completely degrades. However, as prevalence of KoRV is correlated with immune-suppressant diseases such as chlamydiosis (chlamydia) and hematopoietic neoplasia (leukaemia), understanding the process of deactivation might assist in the treatment of these diseases in at-risk koala populations.